WASHINGTON, DC – JANUARY 21: Protesters walk during the Women’s March on Washington, with the U.S. Capitol in the background, on January 21, 2017 in Washington, DC. Large crowds are attending the anti-Trump rally a day after U.S. President Donald Trump was sworn in as the 45th U.S. president. (Photo by Mario Tama/Getty Images) 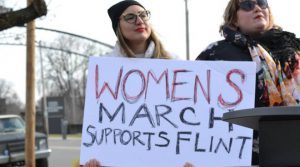